I grew up on a very basic thin broth potato soup.  My mom would dice the potatoes, then add just a little bit of onion to the pot.  She would cover it all with water and let it cook until the potatoes were done.  Then she’d add just a little bit of milk and season it just a bit with salt and pepper.  It was low budget soup and it was delicious!  Usually I make a similar version using chicken broth in place of the water and adding a little extra onion and carrots and celery.  But it’s always been a thinner broth.  That’s what I grew up on and that’s what I prefer.

For Christmas my Mom gave me an immersion blender. I’ve wanted one for the past few years since I started cooking more at home, and I thought it would be easier to make my own home made dressings as well as thickening soup and doing a bit of in the pot blending for other recipes, rather than transferring it all to a blender, then back to the pot.

To help break in my immersion blender I thought I’d try a new spin to my regular potato soup and make baked potato soup. This experiment was well worth it.

The measurements I give here are approximate because I typically don’t measure when I cook.  I’m wild and crazy that way. But these are close and should get you the basic recipe that you can adjust to your tastes. 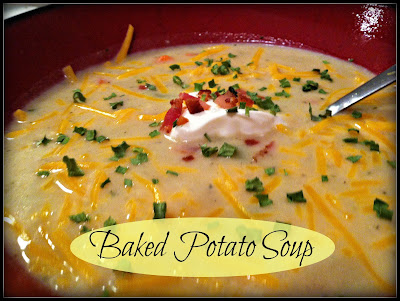 Add potatoes, water and bullion (to make a thicker soup, cover veggies with only enough water to cover and adjust number of bullion cubes to match).  Continue cooking over med heat until potatoes are cooked and easily pierced with a fork.

Remove from heat.  Stir in sour cream and milk. Use an immersion blender, or transfer half of the pot of  soup into a blender once cooled a bit, and process soup until slightly thickened.  Make sure you follow the instructions on your immersion blender so you don’t overheat it.

Return soup to stove.  Add bacon (hold some back if you’d like some for garnish), salt and pepper to taste.  Heat soup through.

Serve soup hot and garnish with shredded cheese, a dollop of sour cream and chives.

Hi, I'm Mary. Positive inspiration lifestyle blogger living in Nebraska. Check out the blog, get to know us, and find a little inspiration along the way. Please comment on the blog posts or shoot me an email if you have anything to share. We'd love to get to know you too! You can send an email to Mary@livingasunshinelife.com