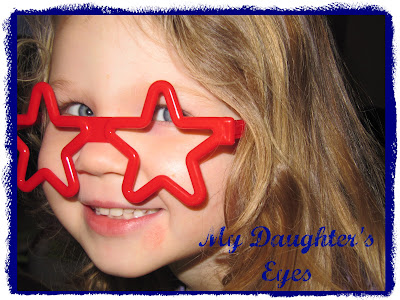 This has to be one of my favorite pictures of my little girl.  She is always so hard to snap pictures of and this one just happened on a run by moment. I love that her eyes came out so bright, she has a real smile on her face, and the cheap plastic glasses from Chucky Cheese just gives her that extra star quality.  We always joke about the girls and their blue eyes because I have green eyes and my husband has brown eyes!  For those of you calculating the scientific odds to this happening, don’t worry, Grandpa Dave and Great Grandpa Harry both have blue eyes, so it works out to be a 25% chance on each kid for them to have blue eyes (since we’ve figured out we both carry a blue recessive gene).  Not so bad of odds after all!
Ok, enough of the science lesson (the homeschooling parent in me is coming out…sorry).  Back to the post about my daughters eyes.  Don’t worry, I’m not here to swoon about how amazingly beautiful her eyes are (but they really are). I’m here to tell you about the little bit of an off centered look I noticed in her eye when she would get really sleeping and start to stare off into the sunset.  For the longest time I thought it was just me. I didn’t notice it all the time, and when I did notice it, it didn’t last long and wasn’t much.  I was probably just being an over protective parent.  Then I got brave and mentioned it to my friend Vonnie.  She noticed it too!  I wasn’t going crazy!  Even though people who weren’t around Charlie all the time weren’t noticing this little bit of a space off, one of my closest friends had noticed it too.  Time to nip this issue in the bud.
At our next Dr appointment for Charlie I mentioned it to our pediatrician. She couldn’t see what I was talking about, but acknowledged that sometimes it doesn’t happen all of the time so she referred me to a children’s ophthalmologist.  Eventually the day came for us to visit the eye doctor. We all filed in the little room, he took a look at her eyes and said he didn’t see what I was talking about.  He asked me a few questions then told me to make another appointment.  I didn’t know why we needed to come in again if nothing was there, but I figured, he’s the doctor and another appointment won’t hurt.  So we came in again a month later.  This time he found it.  “Yes,” he said, “I do see a slight amount of drifting this time.” My daughter had the early stages of lazy eye. Her left eye was not strong enough and was letting the right eye do the majority of the work. Eye patches were prescribed to be worn on her right eye for something like 4 to 6 hours every day. Here is a great picture of Charlie rocking her green ladybug eye patches. 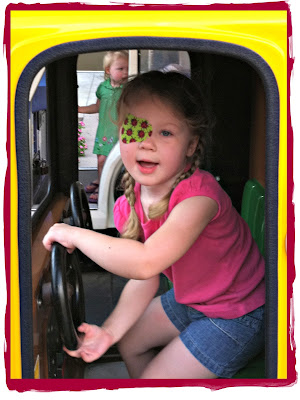 We went back to the eye doctor every three months for an assessment and Charlie ended up wearing these eye patches for over a year.  She started around May 2011 while her Dad was deployed, and continued with them until about August of 2012. Each time we went back the doctor adjusted her time frames a bit.  Toward the end she was only wearing them for a couple of hours a day, but still, I could tell she was tired of them.  I can say that I was very proud of her, for having just turned 3 when she started wearing these eye patches, she did an amazing job with them and never fought me.  She also learned to do a mean impression of a pirate!  “Arrrrrr ye mateys! Gimme your booty!”  Was a frequent phrase heard from her (mostly inspired by talk like a pirate day, but she liked to pretend she was a pirate from Peter Pan when she wore her patch). 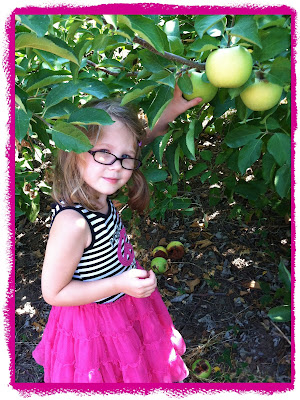 Eventually the eye doctor decided the patches weren’t doing what they were supposed to be doing 100% so he asked if we’d be okay with glasses. Four years old and getting glasses, I wasn’t sure how well this would go over. Charlie was a little hesitant about it and asked me a lot of questions all while objecting loudly to the idea.  We talked through the concerns she had and talked about how many people in her life wore glasses and eventually she came around on the car ride over to the kids vision place. The lady who owns the place helped Charlie pick out some frames all while she played.  She asked her for her favorite color, “purple,” was the quick response, so a mass of purple framed glasses were picked out and brought over.  She started putting frames on Charlie then asking her to look up in the mirror to see what she liked.  Charlie said no to most all of them, then said yes to one pair.  The lady took those frames off, tried a few more which Charlie objected to and then tried the pair Charlie had liked.  She liked them again so we knew we had the glasses!  Charlie was shy while the owner tried to adjust the frames to her face.  I told her we’d go with them the way they were and would come back in a few days after she had the chance to get used to the idea.  Charlie has proudly worn this great pair of purple glasses for the last few months.
A couple of weeks ago we headed back into the eye doctor for yet another follow up appointment.  The nurse, in her usual array of questions asked if I remembered the doctor mentioning cataracts.  The idea caught me off guard, but a vaguely remember him saying something off handed about it a while ago, but not bringing it up again.  We went in to see the doctor and he checked out Charlie’s eyes.  He mentioned that the glasses are ok, but Charlie has a cataract and we need to do something a little more so we could either go back to eye patches or do some eye drops for her right eye.  I voted for drops, Charlie voted for patches.  I told her we’d try the drops first and if they didn’t work right for her we’d go back to eye patches.
Charlie was extremely nervous about getting eye drops.  She’d had them a few times at the eye doctor and hated them.  She would scream, kick and cry. I knew this would be a long shot to work, but the drops were cheaper in the long run and would be easier to do (considering the eye patch has to be monitored all day long and replaced if needed).  I talked it out with Charlie and we decided on a plan.  I was going to let her have some control over this situation to help her ease her way into it.  This is what we did:
There it was.  We had a plan for the feel better eyes and she helped to make it up.  I had given her some control and I could tell this was already easing her mind to the idea.  We went over the plan a few more times through the day and we were ready to go that night.
She fought us.  She made us do everything on our plan to a T, and then kept stalling.  Eventually I thought I had the drop in so I let my husband take over and finish up the bed time routine.  The next morning Charlie came downstairs and complained that her eye felt funny.  We took a look and I’m sure it did feel weird, her right eye was completely dilated!  Don’t worry, this is what’s it’s supposed to do to make her right eye appear weaker giving the left eye a chance to keep up. Take a look for yourself and her pupils. 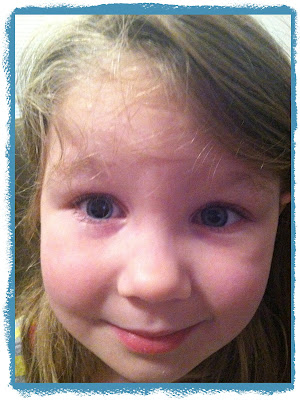 Normally her left pupil would be a little smaller, but I caught her watching TV in a dark room.  Silly girl.  She still wears her glasses too, but I had her take them off for this picture. That’s my little goof!  We have another appointment with the eye doctor in about a month, so we’ll see what he says then.  He doesn’t sound concerned at this point about her cataract, but I’m still a bit nervous.  I’m trying not to research too much online because it doesn’t seem like there is ever a site that gives the whole story, not to mention even people with the same condition can have totally different situations with it.  So, I’m going to try not to worry about her potentially having surgery on her eye since the doctor hasn’t even mentioned it!  I will, however, ask the doctor about the severity of it next time we see him.  I’ll ask him if surgery could ever possibly be necessary.  Until then, I’ll continue to do what the doctor ordered.
For more information on cataracts in children check out this site at Children’s National Medical Center (yes, I know I said I’d avoid the online resources…I’m just looking at general information because I had no idea kids could get cataracts!)
Tweet
Share
Share
Pin
0 Shares
Previous Post: « Peppermint Hot Chocolate Recipe
Next Post: Snow Day Activities »