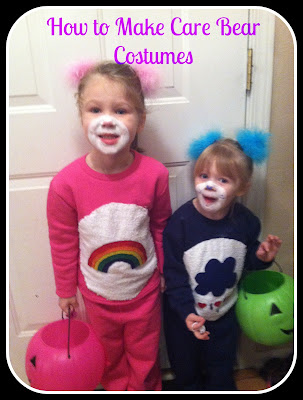 Last night we had a blast trick or treating and I was surprised at how many people who were impressed with the costumes I made for the girls.  Charlie was Cheer Bear and Lena was Grumpy Bear.  The girls have been obsessed with the Care Bears for the past year so it was no surprise when they finally settled on Care Bears as their costume; reflecting their favorite colors, of course.  Once the costumes were decided upon I searched the Internet for some how to’s on costumes.  I couldn’t believe how hard it was to find a how to for making them. I found mostly links to information about care bears and commercial costumes.  So, here I present to you a simple how to for making Care Bear costumes.  I know it’s after Halloween, but we will be using our costumes for dress up and also pajamas, so there are a lot of uses for these costumes, not just for trick or treating.

The first step is to gather the supplies. We started with T-shirts in the appropriate colors, but then I realized I didn’t want the kids wearing coats and it would be too cold to go without.  So we opted for sweat shirts and sweat pants, which was a great decision since you can buy them as sets.

I was worried about how to do the ears because although I’m crafty, I’m usually not too creative.  The best ideas I had were to use modeling clay, formed, painted and attached to head bands. Or to craft them out of some kind of fabric and attach them to head bands.  I was beyond thrilled when I walked back toward the section to find shirts and found some little fuzzy hair barrettes just calling out to me to become the girls Care Bear ears.  They were perfect!

You can see the ears we used in the photo above.  If you wanted to make them, they would be easy as well.  Just get some barrettes that fit in your kids hair, then take a really fluffy craft feather and loop it into a circle.  Attach it to the barrette with string or thin wire and there you go, simple bear ears! 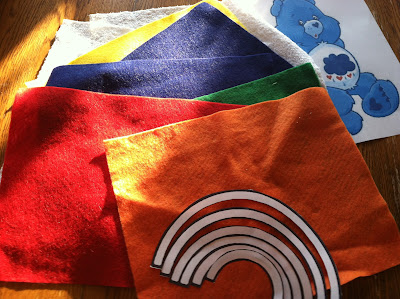 The belly badges were made out of some left over terry cloth and felt.  I printed a rainbow pattern from the Internet and free handed Grumpy Bear’s cloud and the rain drops.  I used a small heart pattern for the heart rain drops. This was a simple process.  Just cut out the pieces and sew them together.  I didn’t do anything fancy with that other than use thread that matched the color of felt it was on. 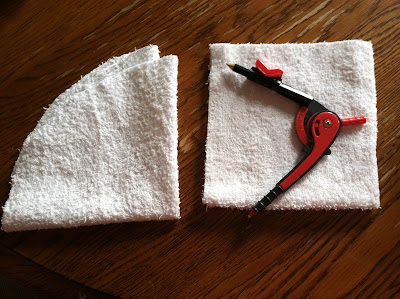 To make the belly part of the belly badge I just took a square of terry cloth, folded it in half, then half again and used a protractor to make a quarter circle on the terry cloth.  I cut following the line and had a decent looking circle when I finished.  The problem I ran into was I needed to putt a little extra pressure on the protractor to get the marks to show which made the fabric pull out of shape a bit and sometimes caused the protractor to stretch out a bit as well.  When I was done I realized I could have made quarter circle patterns and then marked on the fabric with that. local pages .  I wasn’t worried. tunisia .  I didn’t need these to be perfect circles and the girls were more than happy with the results.

I centered the images onto the terry cloth, then pinned them down.  Everything was hand stitched, but if you wanted to you, you could use a sewing machine.

Once the costumes were stitched securely together the girls couldn’t wait to try them on.  Perfect fits and the belly badges looked great on them. The ears were a little off color from the clothes, but it all worked.  Everyone knew what they were supposed to be.

Before heading out for the festivities we needed the final touch: make up. Charlie wasn’t too sure about putting make up on, which doesn’t surprise me because she is the child who asks if I have anything on my lips before she lets me give her a kiss. Lena didn’t care.  She was all ready for me to paint up her face and get messy.  Hearts for noses and three freckles on each cheek completed the look.